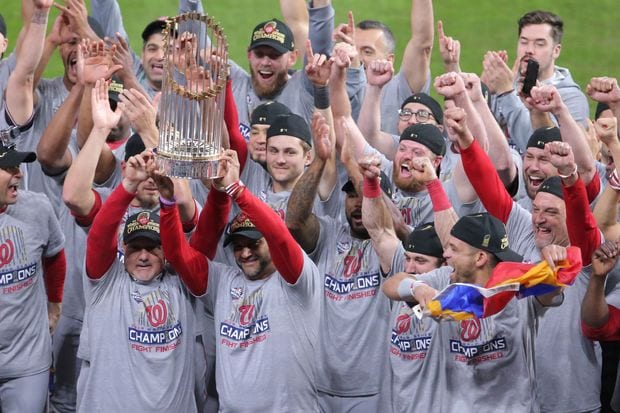 The Nationals can’t go back. They have to stay the heck away from D.C.—until this magical baseball ride cools off. I mean, of course, they can go back, and they will go back to Washington, D.C., suddenly America’s Titletown, with the champion Nats, the WNBA champion Mystics, Ovi and the still-beloved 2017-18 Stanley Cup Capitals—pay no attention to the NBA Wizards and Dan Snyder’s Washington Sadness Machine, sobbing into a towel in the basement of the NFL. The Nats deserve the big parade, the fine Champagne and the love of a town that has waited very, very long for this. They just can’t play there anymore. It’s ridiculous, what just went down. The Nats and the Houston Astros played an entire World Series, a seven-gamer, and the home team did not win once. Zero. Zippo. The away team won every single contest, including Wednesday night’s Game 7 stunner in Houston, as the visiting Nats somehow prevailed, 6-2. This has never happened in baseball. We all know how old baseball is—woolly mammoths played double-headers in the Pleistocene. Whenever something unusual occurs in baseball, and you think, Wow, I bet that’s never happened, there’s always a friend who knows a lot about the game (in my case, it’s the Journal’s sublime baseball writer, Jared Diamond) who says something like, Well, actually, it has, Scraps Abercrombie of the Poughkeepsie Sky Mustangs did it twice, in 1906, and it’s both informative and sort of annoying. Well, there’s no Scraps Abercrombie for what we just saw. It’s an OG original. Me, you and Jared watched it go down for the very first time. A road team winning every game of a best-of-seven has never happened in the NBA or NHL, which is wild, since kooky stuff happens in hockey all the time. MORE BY JASON GAYThe NCAA Enters the 21st Century. And the 20th. October 30, 2019The Great, Useless Tom Brady Freakout of 2019 October 28, 2019The Houston Astros Dig a Deeper Hole October 25, 2019You Can Love the Nationals—and Be Scared of ‘Baby Shark’ October 24, 2019Adam Silver’s Sleepless Nights October 22, 2019This turns everything we assume about sports upside down. Home field is supposed to be among the most powerful advantages in competition. The best teams are near-impossible to stop in their own barns, before their own, crazed fans. What did Ernie Banks call Wrigley Field? “The Friendly Confines.” Winning on the road has romance—it’s an impressive feat, takin’ it to ‘em in their own barn—but home field is traditionally where it’s at. Home field is comfortable. It’s yours. You know every nook, cranny, wrinkle, $13 beer stand. You’re supposed to have an edge. But the Nationals didn’t play like that. They took the first two games on the road against Houston, returned to D.C. for a three-game weekend—and rather lifelessly dropped three straight. It felt like the Curse of “Baby Shark,” and it was a big bummer for a town that had waited a long time for such a shiny showcase. The most memorable thing that happened was when the ballpark crowd warmly serenaded the President of the United States with a Halloween-themed “Booooooo!” cheer. (I’m sure that’s what they told him, anyway.)The Nationals headed to Houston, looking like toast. Win Game 6 and Game 7 in Texas, against Justin Verlander and Zack Greinke? Come on. It wasn’t going to happen. It did. It’s a historic victory. But it means the Nationals should stop playing in D.C. Keep them up in the air, like astronauts aboard a space station. Let’s keep this road trip party going. Bolt the door on Nationals Park, and don’t let the players inside. Hand it over to the local Little League. Convert it to a SoulCycle. Let Dan Snyder’s Washington Sadness Machine play games there. Actually, don’t let Dan Snyder’s Washington Sadness Machine play there. That’s a jinx you can’t remove. The point is the Nationals are invincible on the road. They haven’t lost a roadie since Game 1 of the NLDS in Los Angeles, which feels like 19 years ago. If you know baseball, you know you don’t mess with baseball momentum. It’s a deeply superstitious sport. When the Nats 2020 schedule is released, there better be 162 road games. Jared is fired up. He’s thinking of all the Marriott points he’ll earn.I’m sure Nationals fans will be on board. The parade is in Washington on Saturday. Enjoy it, D.C. Then take this magic show back on the road.

Board of Governors Meeting